skip to main | skip to sidebar

Our trip to OBX

So we've been feeling bad that March and June haven't done much this summer. No summer camps, only one trip, and that was to Santa Rosa to see family. So we planned a trip to the Outer Banks, NC to spend a few days on the beach before school starts again.

The girls did, in fact, have a great time splashing around on the beach and of course June ate all the seafood she could shove into her little mouth.

June is occasionally a wild child, and this was one of those times. She hurtled herself into the waves, not caring a bit when they knocked her to the ground. She just got up again, dug the sand out of the inside of her bikini, and went into them again. She even found herself a new boyfriend there:

Our son, however, is NOT a good traveler so far. First off, he absolutely cannot fall asleep in his car seat. So he was cranky and screaming most of the drive up and the drive back. Rather than making the driver (DH) stressed out from the constant screaming, I chose to hold B in the backseat for much of the drive.

Secondly, B found the sea air to be extremely appetite enhancing. In other words, he ate every two hours the entire time we were there. I fed him in the car, in restaurants, on the beach, in the hotel, and just about everywhere. This from someone who is not especially keen on revealing her boobs to the general public. And of course, every time I modestly covered myself and him with a blanket, he thought it was a fun game to take the blanket off!!

Finally, B didn't seem at all impressed with the beach itself. He did not smile or laugh at 1) toes in the sand, 2) looking at waves, 3) sitting on the sand while the waves approached, 4) entering the water while the waves splashed his legs and belly. Not that he cried or anything. Just didn't seem particularly amused. He did complain occasionally when the water didn't make it all the way to him, but that might have been coincidence.

We had to come home early so that March and June (and fortunately DH not me) could attend a Demi Lovato concert.

After a long bath, B felt much better: 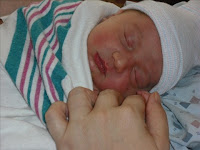 So I'm returning to blogging after a long absence to have my baby and spend some sleepless nights with him. But I know my friends want an update and of course some pictures.

So here's the update. B is now 3 months old. He still spends a lot of his day either sleeping, or trying to sleep. I confess that because we know he'll be our last baby, we spent way too much time holding him in our arms. But his sleep in our arms is so much deeper and longer than in his crib, and selfishly we just want to savor every minute of this time with him.

The question everyone asks: is he sleeping through the night? Well, no, not really, not most nights. Most nights he sleeps from 10 or 11 until aroun 3am, gets up to eat, goes right back to sleep (actually eats while sleeping for the most part), gets up again around 6 or 7 to eat, and goes back to sleep again until 10am. Honestly, it's not that big of a deal waking up to feed him-it takes about 20 minutes and then I'm right back to sleep. DH doesn't wake up at all!

He's definitely smiling at us now, and smiling less often at inanimate objects, although he still smiles at our curtains sometimes, and this lion in his car seat: 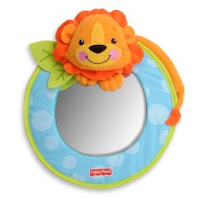 He's holding his head up pretty well now, and really likes to be in any kind of sitting up position. We recently bought him a jumperoo, which he can sit in, bounce when he kicks his feet, turn around, and play with some toys that are attached. He seems to love the monkey (just like June!) and laughs hysterically at it. 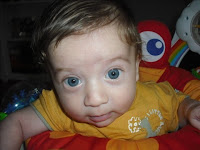 But his favorite place to be above all else is here: 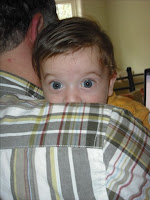 Shopping for a Busy SuperMom

Cindy
I'm a 42 year old mother of two daughters, 11 and 12, and a brand new baby boy. I'm living in Washington DC, via Austin Texas and Los Angeles California. I'm trying to do it all and have it all--raise great kids, have a great marriage, keep my extended family appeased, lose weight, do my job, and, oh yeah, keep my sanity!!